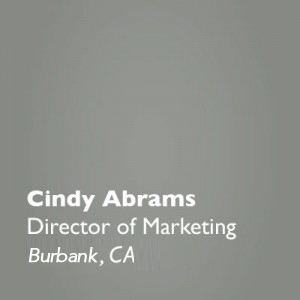 After consulting with AGMB on a number of marketing projects, Ms. Abrams joined the firm in 2015 as the Director of Marketing.

With a background in international sales and marketing, Ms. Abrams brings to AGMB the ability to coordinate the various AGMB practice areas into a strong corporate brand.

Ms. Abrams has extensive experience in fundraising and leadership in non-profit organizations within the educational sphere. She was a Member of multi-disciplinary team that led the conversion of a Los Angeles public school to a district-affiliated charter. She worked on the charter application; elected to Governance Council for two terms and served as co-Chair; volunteered in several capacities and on committees such as hiring committee, by-laws committee, and enrichment programs.

Ms. Abrams also served as the President of the parent group (PFC) Parents for Carpenter at the Elementary level where she oversaw a staff of six specialists that administered music, physical education, science lab, dance, teacher support and administrative functions. She worked closely with the school principal and staff to enact programs and support in all areas of student development. During her tenure, she managed and increased fundraising for a budget in excess of $500,000 per year.

She served as President of the Friends of the Humanities Academy (FOHA) at Walter Reed Middle School and currently volunteers her time on the Campbell Hall High School Outreach committee.